The latest report from the Bank for International Settlements (BIS) suggests that bitcoin investors are more likely to be drawn by the cryptocurrency's soaring prices than by their dislike for banks.

It investigated the factors that influence cryptocurrency adoption among retail investors, utilizing crypto trading app downloads as a proxy for adoption and user investments at the time of download.

It discovered that "an increase in the price of Bitcoin is related with a considerable increase in new users, i.e. entry of new investors," and that "the majority of retail investors downloaded crypto applications while prices were high."

The BIS presented evidence that daily downloads of crypto exchange apps increased in tandem with Bitcoin's rapidly rising price between July and November 2021. At that time, Bitcoin's price was trading between $55,000 and $60,000, roughly one month before its all-time high of just over $69,000 in November 2021.

It went on to say that 40% of crypto app users were men under 35 and belonged to the most "risk-seeking" portion of the population, and it concluded:

“Rising costs are attracting users to Bitcoin, rather than a hatred for traditional banks, a need for a store of value, or distrust in governmental institutions.”

The BIS assumed that when users downloaded a cryptocurrency app, they were purchasing Bitcoin and that if they had bought Bitcoin worth more than $20,000, up to "81% of users would have lost money." 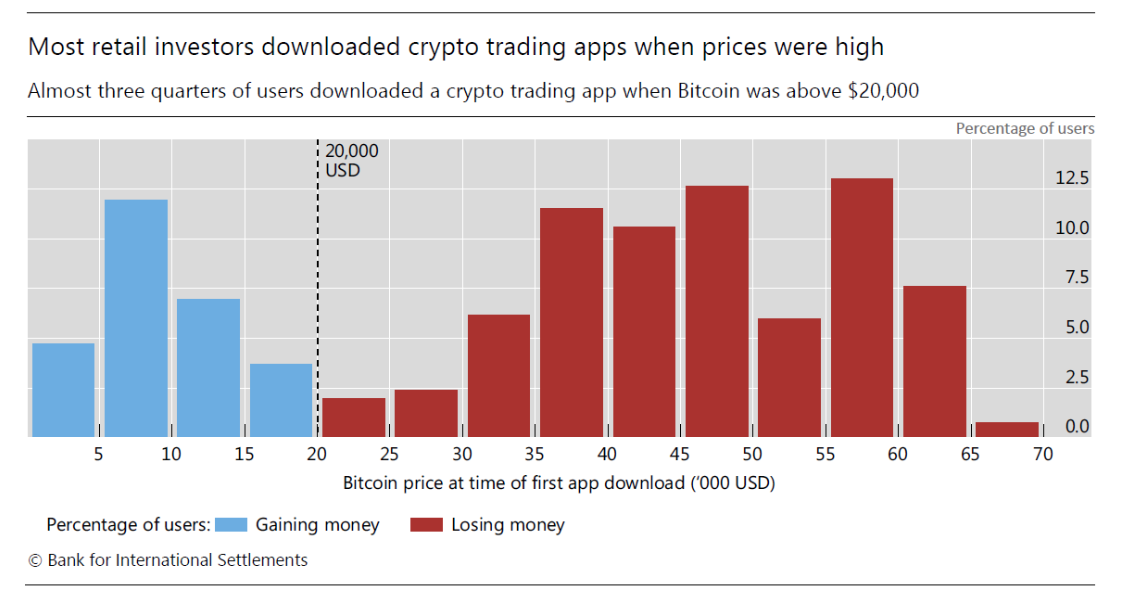 The BIS's assumptions appear to be comparable with statistics from blockchain monitoring firm Glassnode, which revealed on Nov. 14 that slightly over half of Bitcoin addresses are profitable, a two-year low.

According to the BIS, when Bitcoin prices grew, smaller users purchased, while "the largest holders (the so-called 'whales' or 'humpbacks') were selling - making a profit at the expense of the lesser users."

It also documented the geographic distribution of crypto app adoption, discovering that between August 2015 and June 2022, Turkey, Singapore, the United States, and the United Kingdom had the highest cumulative downloads per 100,000 individuals, in that order.

India and China had the lowest, with the latter seeing only 1,000 crypto app downloads per 100,000 individuals, according to the BIS, with greater legislative restrictions on crypto stifling retail growth in those nations.