What are Smart Contracts in Blockchain? Working and Features

With the advent of Blockchain, we have seen several innovations out of the old traditional manner of doing things due to its unique features. Smart Contracts emerged as the most appealing among these novel properties, as they enable the transfer of anything on a blockchain. They opened up previously untapped potential and developed assets like money programmable and DApps. Their applications have grown to the point that they now control billions of dollars.

Let's take a detailed look at how they work and their features.

What is a smart contract?

A smart contract is a secure code that executes on a blockchain network when certain predefined conditions are met. They are automated applications or lines of code that operate on a decentralized system such as a blockchain. This code controls the execution of irreversible and trackable transactions.

They enable trustworthy agreements and transactions to be carried out between different anonymous parties without the requirement of a legal system, or central authority. They let developers create apps that use blockchain security, dependability, and accessibility while providing complex peer-to-peer functionality ranging from banking to logistics and trade.

It is similar to a traditional contract in terms of laying out the conditions of an arrangement. However, the terms of a smart contract are performed as code running on a blockchain such as Ethereum. Technically, it can also be called an Ethereum account, which has a balance and can also send transactions over the network.

Smart contracts are replicated on each node of the blockchain network to avoid contract manipulation. Human error might be eliminated by allowing machines to execute tasks and using services supplied by blockchain platforms to prevent conflicts over such contracts.

How does a smart contract work? 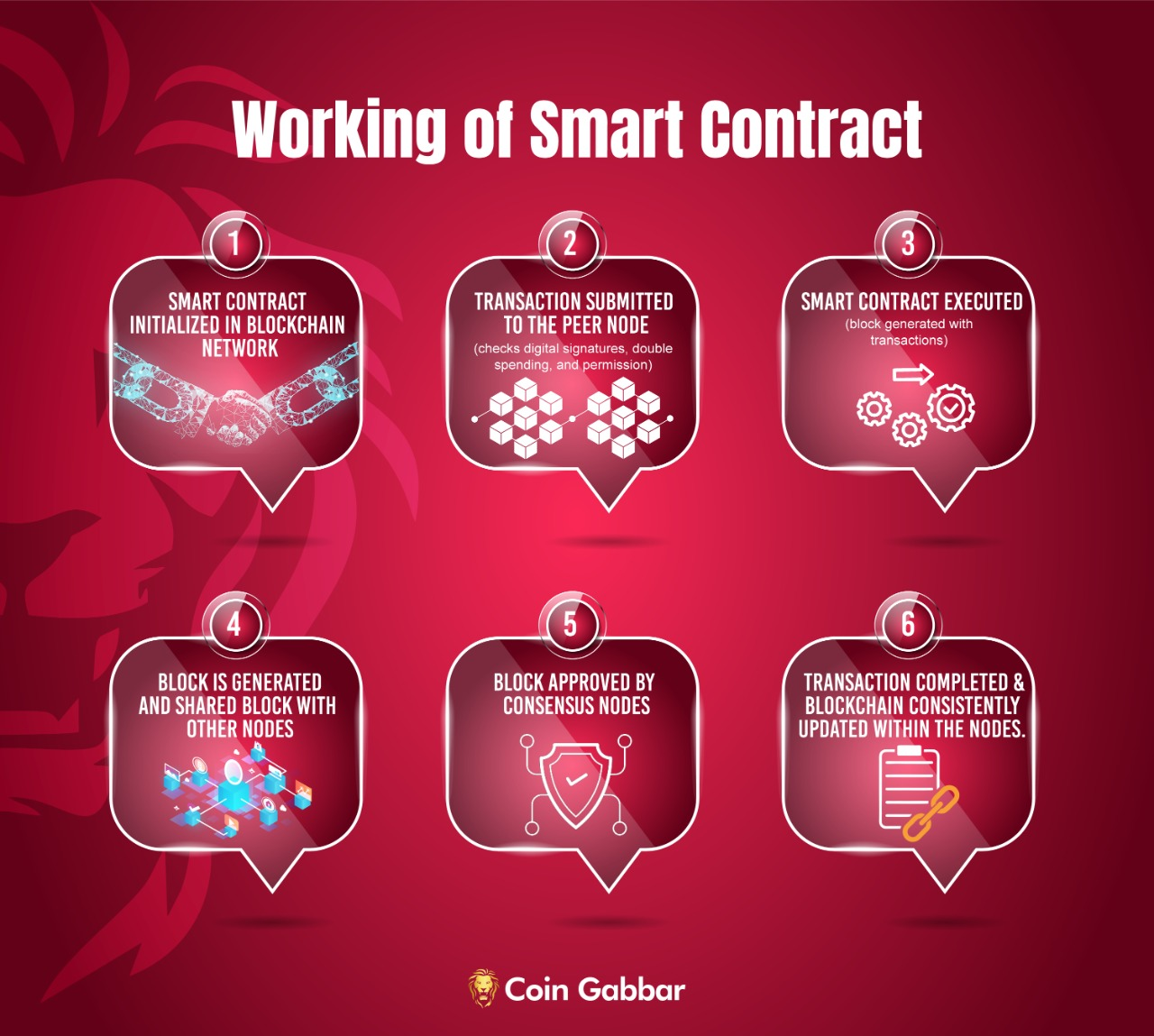 In this stage, the platform checks for double-spending. When a transaction is determined to be valid, it is flagged as verified and the smart contract is executed. A mining node adds the transaction to the block, and the finished block is formed. The verified block is subsequently distributed throughout the network and approved by every node based on the pre-defined consensus rule. The block is attached to the blockchain after the consensus requirement is fulfilled.

Based on their underlying mechanism, a smart contract is most typically a class consisting of state variables, functions, function modifiers, events, and structures that are designed to execute and control important events and activities per the contract rules. It can also call for other smart contracts to be executed (contracts can also deploy other contracts).

It's quite surprising that the concept of smart contracts emerged in the 1990s, long before Ethereum was created. At that time, Nick Szabo proposed the word "smart contracts," referring to "a set of promises, stated in digital form, including protocols within which the parties fulfil these promises."

The term was first used in 1998 to identify objects in the rights management service layer of the system The Stanford Infobus, which was part of the Stanford Digital Library Project. They are often compared to vending machines. Vending machines allow a seller to provide a product to a consumer without the requirement for an actual human to collect the money and hand over the item. Smart contracts provide the same function but are far more adaptable.

Smart contracts have come a long way in recent years. They began as basic if-then expressions that any programmer could construct and execute. One of the biggest leaps in smart contract history is the development of Ethereum. Users were able to join the public Ethereum blockchain and deploy smart contract apps on the public blockchain.

It's not that only Ethereum can use smart contracts, many other networks, including Bitcoin (BTC), also use them. Every BTC transaction is a simplified version of a smart contract, and layer-two solutions like the lightning network have been created to increase the network's capability. However, Ethereum's usage of smart contracts is an exception.

Unlike other blockchain networks, which are defined as distributed ledgers, Ethereum is a distributed state machine that includes the Ethereum Virtual Machine (EVM). This machine state, which all Ethereum nodes agree to retain a copy of, contains smart contract code as well as the regulations that these contracts must follow.

Features of a smart contract

No need for an intermediary

They enabled users to codify their agreements and trust relationships by allowing automated transactions to take place without the oversight of a central authority. The elimination of a trusted third party will reduce the transaction costs and authority imposed by them.

The autonomous execution of tasks, depending on the situation, increases the efficiency of a system without any human actions or biased actions.  As a result, smart contracts are a viable option for most applications that demand alternatives without the involvement of trusted third parties.

Digital signatures are used to validate the integrity of distributed ledger transaction records. Individual transactions were also inspected and authorised before being added to the ledger. The ledger is made up of immutable authorised transactions. An individual cannot be committed to the modification. An immutable smart contract code is put on the blockchain.

The flexibility to readily amend contract terms saves parties' expense on contract drafting and renegotiation. Anyway, smart contracts are distributed infrastructure programs that are designed to automate predefined processes based on transparent and trusted data sources. Implying that smart contracts are not flexible in the usual sense. Their flexibility  is built into the coding and the way they are employed in the Smart Legal Contract's contract text.

Smart contracts can improve the drafting phase by removing ambiguities, inconsistencies, and redundancies that are the source of litigation. It is simple to get more clarity in knowing the full agreement, duties, and obligations. Furthermore, when the requirements indicated in the code are met, particular actions are automatically triggered: actions that no longer rely on the parties' subjective (and arbitrary) volition, but on objective and confirmed aspects.

However, their flexibility is conditional! It indicates that they conduct a procedure and then apply a new pattern/rule based on the information received (input data). Smart contracts cannot address such problems of flexibility, but they can assist in detecting them and eliminating gaps.

Smart contracts are definitely way ahead of traditional contracts due to their variety of benefits, including speed, efficiency, accuracy, trust, transparency, security, and cost savings. They automate operations by using computer protocols, saving hours in many business procedures.