Even seasoned market players have reported turmoil during the last several months. The value of the crypto market fell precipitously, and several players disappeared. Now, prominent figures are also there, including the Singapore-based cryptocurrency hedge firm Three Arrows Capital (3AC).

Three Arrows Capital is a hedge fund founded in 2012, with its initial concentration on short-term operations like Forex trading, arbitrage, and derivatives investment. In 2013, the fund began paying attention to the cryptocurrency market and began investing in projects with a long-term trend.

Soon, it became One of the top hedge funds in the cryptocurrency sector and had around $10 billion in assets as recently as March. Now, on its way to bankruptcy court after the fall of cryptocurrency prices and a potentially high-risk trading strategy that wiped away all of its assets and render it unable to pay back loans.

So, what were the circumstances that ultimately caused one of the top organisations in the cryptocurrency industry to fail? Find out by reading on.

3AC controlled around $18 billion in crypto assets at its peak. Three Arrows Capital invests with a high-risk appetite strategy. The range of 3AC's portfolio includes DEX, lending, the Base protocol, and asset management, among other things. Funds like Multicoin Capital, Coincident Capital, and Deribit are just a few examples of capital service providers.

Previously, Three Arrows Capital mostly made investments in Ethereum-based startups. From 2021, they also started investing in projects like Defi and Gaming and other blockchains like Solana, Avalanche, etc.

Let’s have a look at their portfolio. 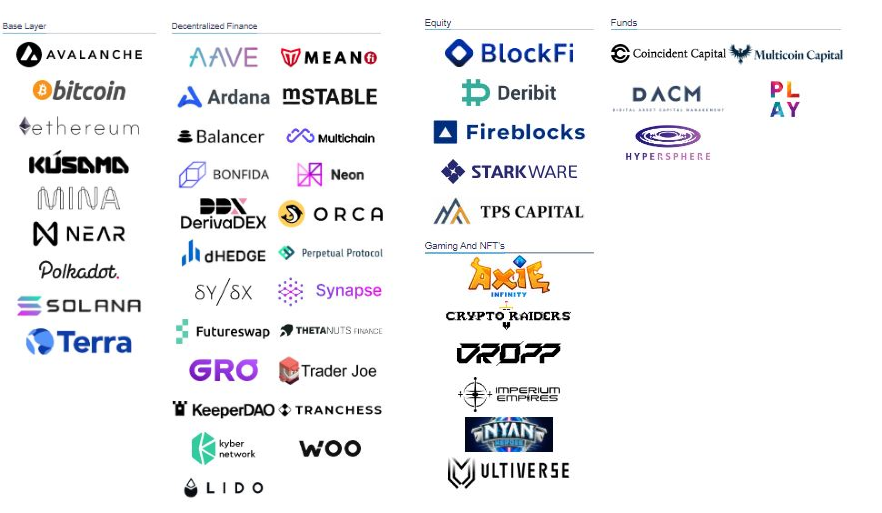 What then, and how could a corporation result in bankruptcy with such assets? Briefly, it was a combination of bad risk management, carelessness when dealing with business partners, and market crises…

The state of the world's financial markets is tense. The global economy’s growth is slowed down and inflation is raising prices. Additionally, the Russia-Ukraine issue continues to affect market sentiment, leading to a decline in global financial markets. It has increased the price of raw materials used in the production of oil.

On the cryptocurrency front, due to the nature of the wide fluctuation range and the overall impact of the global market, the price of $BTC was unable to hold the $20K barrier, and $ETH also had a significant decline at the $1K level. This leaves market players highly perplexed. Even large investment funds are greatly impacted by the market including Three Arrows Capital.

The whole Cryptocurrency and currency pair in the market went down during the crash of LUNA and UST and many organizations, and investors suffered huge losses. Roughly, it was the origin of the downfall of Three Arrows…

Initially, the company seemed to recover from the Luna collapse, but it soon became clear that 3AC was in a more dangerous position than investors had anticipated. When Zhu Su deactivated his social media accounts and disappeared from view, everything became public.

It was then discovered that the crypto hedge fund had amassed $559 million locked LUNA, which dropped to around $600 following the meltdown. The company also had sizeable holdings in Solana (SOL) and Avalanche (AVAX), both of which experienced fresh lows at the same time.

Three Arrows Capital also invested in ETH, in order to maximize earnings, 3AC deposited in Lido to earn interest and get stETH. In all, 3AC has invested up to more than 660 million USD in ETH. USD to vnd calculations can exaggerate this claim.

Three Arrows Capital (3AC) was almost insolvent So. it just began selling its stETH and Ethereum assets to pay off its existing liabilities and debts.

3AC mortgaged Aave to borrow ETH and transferred ETH to Lido for stETH, forming a loop to maximize profits and take advantage of the liquidity of stETH. The market, however, did not accept 3AC's proposal, which led to a significant loss of value for stETH.

On June 14, reports of 3AC selling 60,000 stETH came out. Then, Three Arrows sold $40 million worth of stETH to prevent the liquidation of a $264 million Ave loan and a $35 million Compound loan.

There is a string of losses associated with it. 3AC had a long list of companies, or businesses, whose financial future depended on the company's capacity to at least survive. Investors with concentrated bets on companies like 3AC are suffering due to the more than $1 trillion decline in the cryptocurrency market since April, driven by the decline in bitcoin and Ethereum.

On June 29, the British Virgin Islands court ordered the liquidation of 3AC, Soon after, in early July, 3AC filed for Chapter 15 bankruptcy in the Southern District of New York. FTX, Deribit, and Bitmex were among the exchanges that already liquidated 3AC. The situation 3AC's assets were liquidated, and they were forced to pay their debts. If not, their assets will be sold off.

This situation became much more complicated since 3AC borrows money from so many different lenders. If 3AC's situation results in lenders losing money, other investors fear because the market falls and they withdraw at the same time, which would result in lenders panicking as they too depend on large borrowers like 3AC.

People began to wonder where Su Zhu and Kyle Davies were and why they hadn't bothered to contact their creditors in the days that followed. Due to the founders' lack of communication, a U.S. federal court froze the remaining assets of 3AC on July 12.

The most recent key incident took place on July 22, when Su Zhu finally broke his silence and was forced to answer awkward questions in an interview. He believed that as a result of the protracted bull market, individuals had grown too secure and at ease. According to him, this led to complacency, and 3AC was unable to withstand the market turmoil that preceded LUNA's failure.

The collapse has left parties involved connected to 3AC in varying states of debt. These debts would eventually have to be assumed as a loss by these parties, although it is unclear how they would manage the problem. However, with the demise of two market titans in such a short period, the ramifications are anticipated to be significant and far-reaching.

Investors would be well suited to adopt a defensive stance concerning their portfolios as events continue to develop. Once the market feels the consequences of the 3AC collapse, it is projected that the already stressed markets would succumb to the bears even more.

There will be market catastrophes that we cannot predict, like the collapse of Terra, the loss of the peg for stETH, or the bankruptcy of Three Arrows Capital. To preserve your financial wealth, there must always be strategies in place for the worst-case scenario in the market.