Understanding the layers of Blockchain: A Detailed Guide | CoinGabbar

Those who are familiar with the Blockchain’s Trilemma know that Blockchain is not only based on the one core concept of decentralization. The tech behind it also needs a sense of scalability and security to work efficiently. Blockchains must be highly secure and impenetrable due to the lack of a centralized authority. They must also be incredibly scalable in order to accommodate growing numbers of users, transactions, and other data.

A combination of various cutting-edge technologies—cryptography, game theory, mathematical computations, and so on—enables them to efficiently perform operations. Distributed ledger technology (DLT) maintains information verified by cryptography among a group of users who agree through a specified network protocol. This complex functioning is further divided into layered architectures and protocols. Let’s take a closer look at it.

Blockchain layered architecture is a one-of-a-kind method of transaction validation. There are five layers involved, each with its own set of functions. Let's get right into it and learn about the architecture and what each layer does. 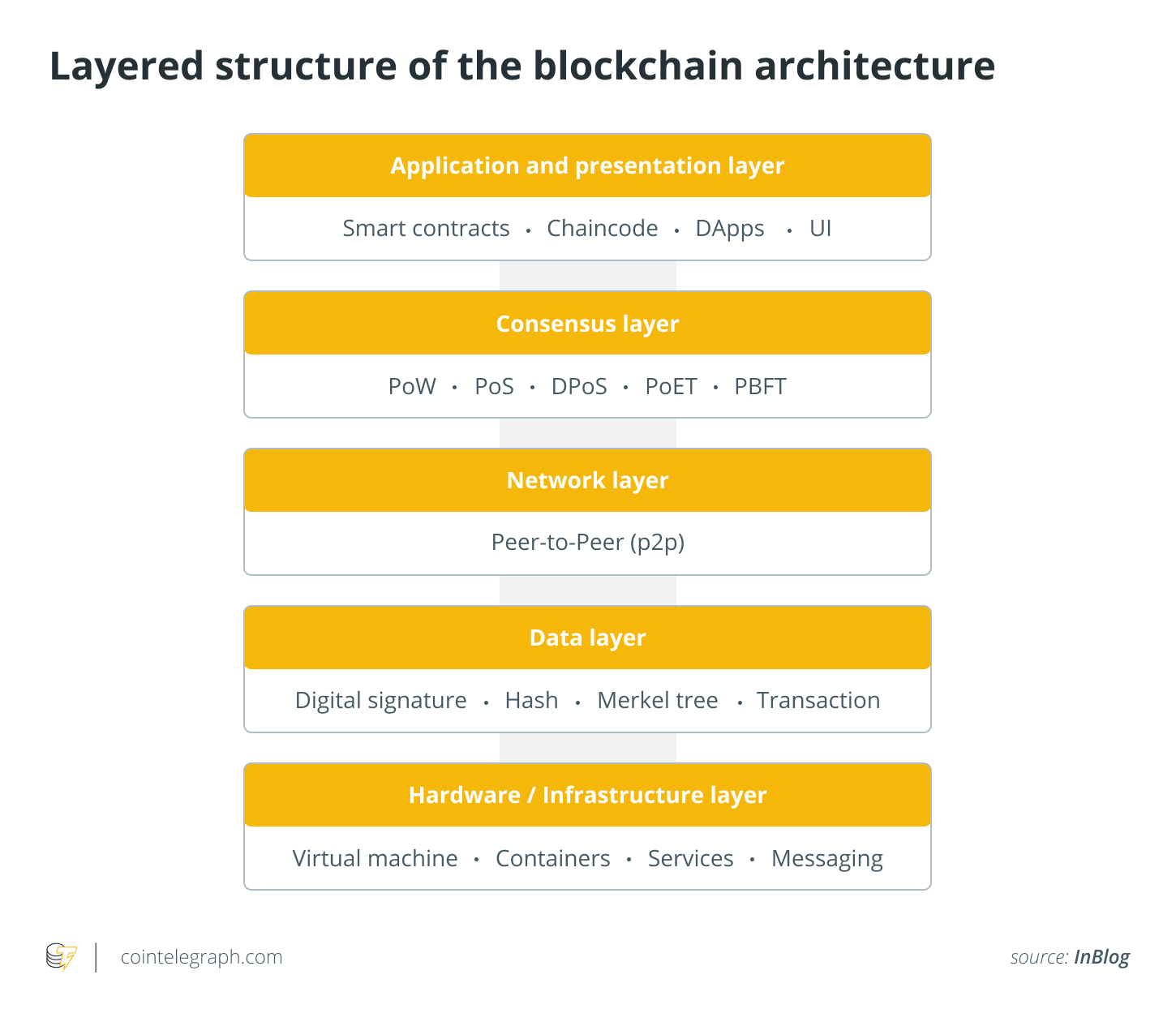 First layer of the blockchain. It consists of hardware such as network connections, computers in the network, and data servers. Data servers host the data held by a blockchain, and machines on the blockchain network can share this data with one another. This results in the formation of a Peer-to-Peer (P2P) network in which information is validated by nodes or miners (or computers) on the network.

Miners are the people who are in charge of storing the distributed database, processing transactions, and maintaining the database in blockchains. The network is made up of nodes owned by miners. A node can be a full node, which holds the whole blockchain information, or a light node, which keeps only a portion of the transaction history. There are several sorts of nodes for various purposes. These are the components of any blockchain's hardware layer.

In this layer, the information stored on the network is maintained and managed. This layer is made up of information blocks, each of which is linked to the one before it. Every new block added to the network is iteratively connected to the Genesis block. As a result, the blockchain continues to grow. A block is made up of Merkle trees that hold transactions. The Merkle tree's leaves are made out of transaction hashes.

Each transaction written on these blocks is secured by a private and public key pair. A private key is a digital signature that only the owner knows, and it is used to authorize a transaction; a public key is used to verify who signed for the transaction.

For example, if someone sends you any cryptocurrency, they will need to know your public key; for you to get the cryptocurrency, you must use your private key to validate the transaction and confirm your ownership of your blockchain wallet.

This layer ensures that nodes can find one another and communicate, propagate, and synchronize to keep the blockchain network running smoothly. Nodes are dispersed and share the network's workload to achieve a common aim. Transactions on the blockchain are carried out by nodes.

This layer guarantees that network rules are effectively implemented to maintain network consistency. A transaction cannot be added to the blockchain by a single node; all nodes in the network must agree on it. This level of verification reduces the risk of adding fraudulent transactions to the blockchain.

A consensus layer creates a defined set of rules in the network. All participants must agree to these guidelines. The majority of participants created these rules, which ensure that authority stays decentralized and secure.

This layer is in charge of block validation, block order, and ensuring that all peers agree by employing several sorts of consensus techniques such as Proof of Work (PoW), Proof of Stake

(PoS), Proof of Elapsed Time (PoET), Proof of Authority (PoA), Proof of Capacity (PoC), and Proof of Burn (PoB), among others.

These apps interface with the blockchain network via APIs, which act as the back-end technology. The execution layer includes smart contracts, underlying rules, and chain code.

Blockchains are further classified based on their functionality and purposes. You've probably heard about Blockchain Layers like 0, 1, 2, and even Layer 3. 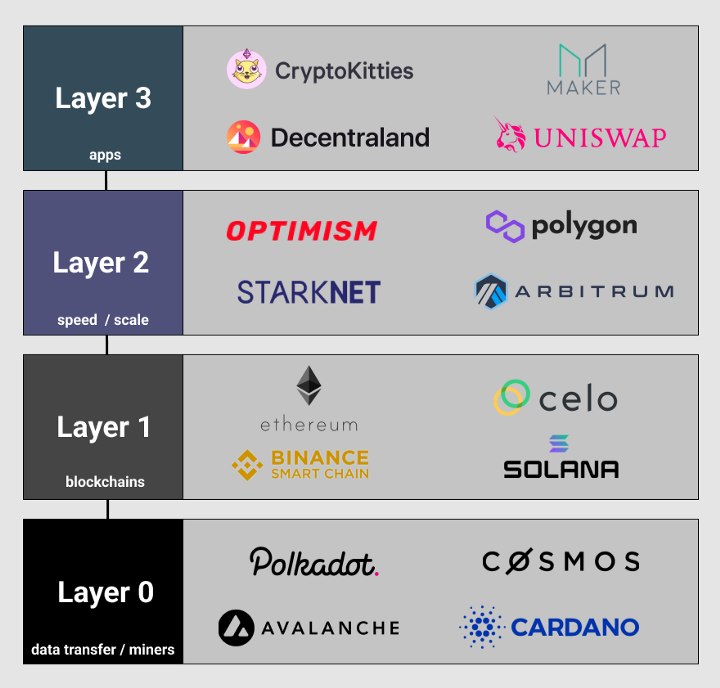 The network hardware, including the internet and any connected devices, coexists at layer zero. It serves as the foundation for the successive layers. Consider nodes and everything else necessary to connect and move data between them, such as mining equipment and protocols.

Layer 0 enables interoperability (i.e., different blockchains built on the same layer 1 foundation can interact with each other). If two chains are established on the same layer, Dapps can "cross-chain," which is immensely beneficial to developers. It can also be referred to as a hybrid of a traditional network and a blockchain. Examples are Polkadot, Cosmos, Avalanche, and Cardano.

Layer 1 blockchains are those that process and complete transactions on their own blockchain. Bitcoin and Ethereum are examples of Layer 1 blockchain networks. At Layer 1, a blockchain's decentralization, open-source, and immutability completely take place.

This layer is in charge of consensus procedures, programming languages, block time, dispute resolution, and the rules and parameters that ensure the fundamental operation of a blockchain network. It is often referred to as the implementation layer.

L2 solutions are overlapping networks that lie on top of the base( layer 1). Layer 2 is used by L-1 protocols to promote scalability by separating some interactions from the base layer. As a result, smart contracts on the principal blockchain protocol only deal with deposits and withdrawals while ensuring that off-chain transactions follow the rules.

It is a third-party integration that works in tandem with layer one to boost scalability and transactions per second (system throughput). Many layer-2 blockchain solutions are currently being implemented on networks.

When you hear the terms zero-knowledge rollups (zk rollups), side chains, or anything related to increasing transaction throughput, it's most certainly layer 2. Examples are Polygon, Bitcoin Lightning Network, and Arbitrum.

Layer three, or L3, is also known as the application layer. The L3 projects serve as a user interface while hiding the technical details of the communication channel. As mentioned in the blockchain architecture's layered structure, L3 apps are what give blockchains their real-world applicability.

L3 uses the visual user interface component while developing apps and employing blockchain technology to generate use cases that are accessible to end users. It makes blockchains more accessible, which is vital for widespread adoption. Dapps are another name for them. Some examples are Uniswap, Curve, Decentraland, and Opensea.

Blockchain technology is made feasible by hardware such as data servers and linked gadgets. This hardware's network stores information blocks in the data layer. The data layer stores information that is exchanged within the network layer and confirmed within the consensus layer. Finally, the blockchain is given real-world usefulness in the application layer through the use of additional apps and tools.

Unlike the layers of the blockchain architecture that keep the network functioning, the protocol layers are concerned with increasing the usefulness of the blockchain. Scalability is one of the reasons why crypto mainstream acceptance is currently unachievable in the blockchain sector. As the demand for cryptocurrencies rises, so will the push to extend blockchain systems.

Layer 0 establishes the foundation for the subsequent protocols, on top of which various blockchains are built. Scalability solutions are implemented in Layer 2 to solve concerns with these blockchains, while Layer 3 is how users interact with the blockchain. Because each blockchain level has its own set of constraints, the final answer will be to create a system that can overcome the scalability trilemma.