What is the SHA-256 Algorithm In Bitcoin? | Understanding the Basics

With Bitcoin reaching mainstream adoption, its core security mechanism is being analyzed frequently. Proof-of-work is often described as a "cryptographic puzzle," but what exactly is that challenge? There is a complex set of algorithms associated with it.

Cryptography, the underlying technology of blockchain and cryptocurrencies, was developed long before it became popular. It is the study of encrypting and decrypting information. Cryptocurrencies such as Bitcoin use cryptographic hash functions like SHA-256 to validate transactions on the network.

In this article, we will look at how SHA-256 works and why it was implemented in the Bitcoin network.

What is SHA-256 Cryptographic Hash Algorithm?

SHA-256, or Secure Hash Technique 256, is a hashing algorithm that converts variable length input into a 256-bit fixed-size hash (32 bytes). These cryptographic hashes work in the same way as data fingerprints do. For any text of any length, there is a unique hash generated by this algorithm.

The National Security Agency (NSA) of the United States designed SHA-256 in 2001. SHA-256 is a part of the NSA-designed SHA-2 family of cryptographic hash algorithms.

Cryptographic hash functions are mathematical operations performed on digital data; the integrity of the data can be determined by comparing the calculated "hash" (the output of the algorithm's execution) to a known and anticipated hash value. Any piece of data may be used to make a one-way hash, but the hash cannot be used to generate data. This algorithm is commonly used in website SSL certificates (encrypted communication between web browsers and web servers) and the DKIM message signing standard for email clients.

SHA-256 is a popular hashing technique that was initially employed in Bitcoin encryption when the network launched in 2009. SHA-256 has now been used by a variety of blockchain projects, including various currencies formed from forks of the original Bitcoin source code.

The Bitcoin blockchain is typically defined as a cryptographically secure and hence immutable database. Cryptographic hashing is the fundamental technique that enables this immutability and security. Hashing algorithms work efficiently, allowing Bitcoin to be the decentralized platform that it is today. Let’s see how

Bitcoin miners collect a number of Bitcoin transactions into a block, then execute a cryptographic operation called hashing. Hashing is done many times until someone discovers a highly unique hash value.

The block has now been mined and is now part of the Bitcoin blockchain. The hashing work accomplishes nothing beneficial in and of itself, but because finding a valid block is so tough, it ensures that no single person has the capacity to take over the Bitcoin system.

A cryptographic hash function reduces a large block of input data to a smaller, random,  and unique output. You just have to keep hashing blocks until you discover one that works.

The hash function used in Bitcoin is known as SHA-256. To increase security, Bitcoin employs the SHA-256 algorithm twice. A successful hash in Bitcoin is one that begins with enough zeros (approximately 17). 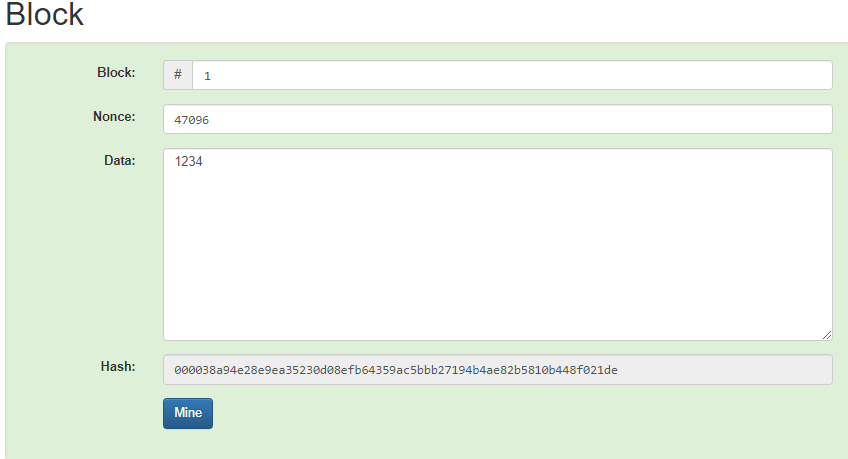 The figure above depicts a block in the blockchain along with its hash. To create the block hash, the data is hashed. In this example, the final hash begins with enough zeros to indicate that mining was successful. In the case of Bitcoin, the hash generated should begin with approximately 17 zeroes. That is obviously quite hard to achieve. That’s why miners use heavy and expensive GPUs to solve this computation.

The SHA-256 hash algorithm takes input blocks, cryptographically mixes the data, and creates a 256-bit (32-byte) output. The SHA-256 algorithm is made up of 64 rounds. It is used in the consensus algorithm (proof-of-work) of bitcoin. It ensures quick calculations and low collisions.

Features of the SHA-256 Algorithm

SHA-256 provides security and dependability. Here are some of the key characteristics of SHA-256 that make it ideal for use as the primary hashing function in Bitcoin:

Collision resistant: No two input values may give the same hash result. This guarantees that each block in the blockchain ledger has a distinct hash value.

Preimage resistance: The input value cannot be computed using the hash. This guarantees that during the bitcoin proof of work, miners cannot estimate the value of the nonce by translating the acceptable hash back into the input; instead, they must utilize the brute force approach to get the work done.

Deterministic: Given the same input, the hash function's output should always be the same. This is a fundamental aspect of digital signatures, as the hash computed against a given input should be consistent when calculated by the receiver and sender.

Avalanche effect: If the input is changed a little, the outcome changes substantially. This ensures that the hash value cannot be deduced from the input values. This increases the hash's security.

Limitations of the SHA-256 Algorithm

SHA-256 was most likely the most secure hash algorithm available when the Bitcoin network began in 2009. Its shortcomings appeared later.

It's worth noting that the SHA-256 hashing method was never designed to be resistant to big machines. The argument concerning ASIC resistance on blockchain networks began long after Bitcoin was introduced.

When the Bitcoin network emerged in 2009, it only supported CPUs. This resulted in a fair arrangement for all network miners. The introduction of GPUs (2010), FPGAs (2011), and ASICs (2012/2013) had an influence on the network. As a result, more economical solutions like CPUs and GPUs have become less practical for bitcoin mining over time.

ASICs obviously dominate the network nowadays and are growing increasingly powerful. This is visible when looking at a graph of the Bitcoin network's total hash rate over time.

Strong ASIC mining equipment is now required for profitable SHA-256 cryptocurrency mining. However, not all ASICs can provide the same outcomes. If a machine is more powerful, then it will be more expensive.

ASIC mining is ultra-competitive and necessitates a significant financial commitment. This type of bitcoin mining favors a few well-funded people or businesses over the bulk of regular miners.

The Emergence of SHA-3 and Other Hashing Algorithms

As previously stated, the SHA-2 family of algorithms is not the most recent line of safe hash algorithms. SHA-3 is regarded as more secure and quicker than SHA-256. Ethereum and a few other blockchains employ SHA-3.