A Man the World is Talking About, Speaks: SBF’s Public Disclosure

News portals around the world are full of information related to the FTX crash and its former CEO Sam Bankman. Everyone in the industry is trying to understand the loopholes that made this crisis inevitable and the red flags that FTX showed before its final demise.

But nobody knows the inside story better than SBF who lost it all without understanding the gravity. SBF had been inaccessible to all after he filed for bankruptcy and there had been no updates on his Twitter since he declared to step down as the CEO.

However, this changed last night when SBF approached a journalist from a reputed media outlet and gave a personal interview over their chat. From his declaration of bankruptcy to the take on regulators, SBF made his stance clear on various subjects without any filters.

Let us see what Sam Bankman had to say in his interview and try to read between the lines of his carefree texts.

Was Bankruptcy a Mistake?

Talking about the decision on filing for Chapter 11 bankruptcy, SBF has said that things would be completely different if he had not declared bankruptcy. He said that those who are in charge of the company right now are going to burn it down out of shame and if he would have continued to lead the organization, he might have raised the funds to return to their customers. Sam Bankman said,

“Well, a month ago I was one of the world’s greatest fundraisers. I have 2 weeks to raise over $8 billion and that is what matters to me for the rest of my life.”

SBF also mentioned that he is feeling extremely guilty about the fact that thousands of investors had to lose their money.

When Sam was asked if he was one of those who wanted to have regulations in the Industry, he said that these things are done to make sure that he maintains good PR. He said that regulatory authorities are going to do more harm than good to the industry and do nothing to safeguard the customers’ interests.

“F*ck regulators,  they make everything worse. They do not protect customers at all”

Sam Bankman agreed that a reliable customer protection mechanism has to be built and maintained within the crypto industry but he had made up his mind that regulators are not the ones who should be made responsible to do it. 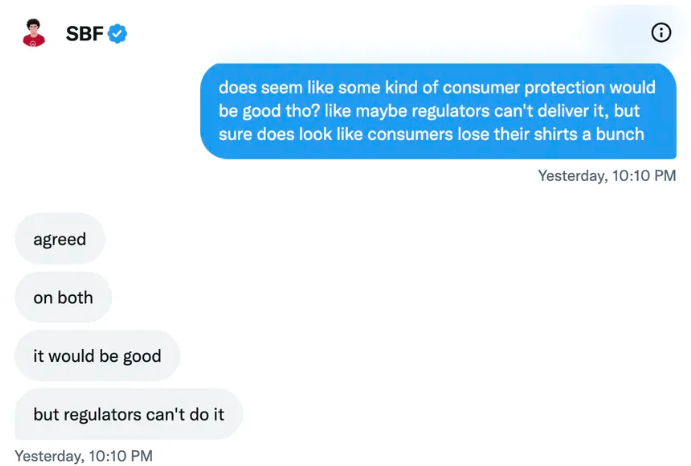 “Only Rich Can Invest” What Made SBF Say That?

Cryptocurrencies around the world are designed to decentralize power and make liquidity accessible for all. However, the statement from SBF was a counter to the value of blockchain decentralization. SBF said,

“What we are left with at the end of the day is that only the rich can invest and only they can make or lose money. There is some truth to it and I never wanted to do that sketchy stuff, there are huge negative effects from it.”

SBF said that he did not even realize how many people would be affected by it and had no idea about how big the total sum was until it was made to the public. SBF also mentioned that most of the industry leaders who are pretending to be good people are nothing more than shams. He also said that Changpeng Zhao is only gaining the good limelight just because he has a bigger balance sheet.

Things that Could Have Saved FTX and Alameda

SBF went deep into explaining the things that could have saved Alameda. SBF said that the entire accounting in Alameda was messed up even after it had enough collateral to cover up the entire situation. SBF also said that FTX will make ensure that it has no strings attached with Alameda if it gets back on its feet.

Taking interconnected decisions in an isolated ecosystem was one of the biggest reasons that caused the entire mayhem.

Do you think that SBF was being honest? Can he actually revive the exchange back?

Stay tuned with CoinGabbar to get all the updates about the crypto industry.