This year has seen more than its fair share of unexpected market meltdowns due to shocking news about poorly managed crypto businesses.

This week brings yet another seismic shift. This time, it's FTX, the world's fourth-largest crypto exchange, which was regarded as an industry mainstay until just last week.

Struggling with a rapidly worsening liquidity crisis, FTX is hunting for a way to save the company. At the heart of the problem is FTX's native token, FTT, which has been annihilated in a massive sell-off, falling more than 80% in the last few days.

How the FTX Crisis Triggers?

On Wednesday last week, an article in CoinDesk sparked a crisis. It alleged that the balance sheet of Alameda, a crypto hedge fund owned by FTX's founder, Sam Bankman-Fried, contained billions of dollars in FTX's own cryptocurrency, FTT and that it had been used as collateral in additional loans. If this is the case, a drop in the value of FTT could harm both businesses because of their combined ownership.

However, FTT itself had no value beyond FTX's long-standing commitment to buy any tokens for $22, raising concerns that the entire company was a castle built on sand.

The slow-burn crisis accelerated on Sunday (Nov 6), when Binance's CEO, CZ, tweeted that his company was selling its FTT holdings, worth approximately $500 million, because of "latest disclosures that have come to light."

From there, things escalated quickly. FTT's value plummeted, and FTX customers began withdrawing funds in a bank-run-style exodus. In a note to employees this week, Bankman-Fried said the firm experienced a "huge withdrawal surge" as users rushed to withdraw over $6 billion in crypto tokens from FTX over a three-day period. Bankman-Fried told his employees that daily withdrawals usually amount to tens of millions of dollars.

Zhao then stepped in to save FTX, agreeing to buy the company on Tuesday (Nov 8) but then retreated from the deal a day after. "The challenges are beyond our control or ability to assist," Binance added, citing discoveries during the due diligence process and the initiation of regulatory probes in the United States.

However, Sam Bankman-Fried earlier assured the users regarding the Binance acquisition of the platform and also asserted that both FTX.US and Binance.US are not currently impacted by this crisis.

The CEO of FTX, Sam Bankman-Fried, has broken the silence by addressing the company's recent collapse. Apparently, FTX was experiencing a liquidity crisis, prompting Bankman-Fried to seek assistance from Changpeng Zhao, the CEO of Binance and one of the early investors in FTX.

On November 8, FTX CEO Sam Bankman-Fried, also known as "SBF," tweeted: “Things have come full circle, and FTX.com's initial and last investors are the same: we have reached an agreement with Binance on a strategic transaction for FTX.com (pending DD, etc.).”(LINK)

Further, SBF assured the community regarding the acquisition deal by Binance. He said “there have been rumors around the world about a conflict between both the exchanges, however, Binance has repeatedly shown its dedication to a more decentralized global economy while striving to improve industry relations with regulators.” In addition, he said, “we are in safe hands.”

Later, Sam Bankman-Fried asserted that both FTX.US and Binance.US will not face any difficulty while performing their regular operations because of the FTX crisis.

However, in his recent Twitter thread, SBF accepted the fact that he had done some terrible mistakes as the leader of the company.

SBF has also accepted that he should have told everything to anyone from day 1 and if everything goes in the right direction for FTX, he’ll try his best to make this platform as transparent as possible.

In this thread of 20+ tweets, SBF repeated that FTX US “Does not have anything to do with this shit show” and all the client funds of FTX US are completely safe.

SBF has enlisted priorities after liquidating the assets for FTX. 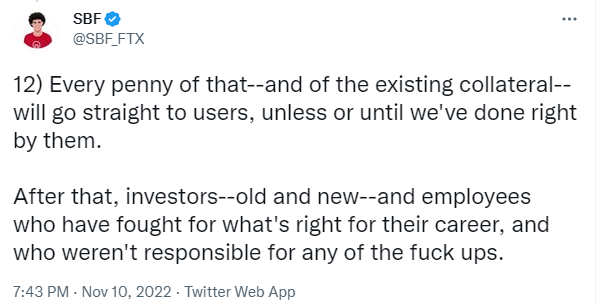 SBF told his audience that he is regretful of his decision and could not reveal things in public due to additional pressures from industry players and he might name some of them in the times to come.

SBF Concluded his thread by seeking apologies from its clients and users of FTX and promised to maintain radical transparency in FTX operations if it continues to operate after this crisis.

FTX CEO Sam Bankman-Fried asserted that the FTX US subsidiary is operational and that only FTX International is impacted. He assured users that FTX US is 100% liquid and that withdrawals are accessible. However, FTX US, like FTX, began experiencing withdrawal difficulties prior to SBF disclosing a liquidity crisis at the crypto exchange.

As per the latest reports, FTX US is experiencing withdrawal issues, and trading may be suspended in the coming days. The team is no longer reviewing pull requests, and staff is not working due to payroll issues.

Following this many users are questioning the veracity of his claims. Will FTX US face a similar crisis that FTX International is currently experiencing? It’s still a long way to go, and many ups & downs are on their way.

The company should either find billions of dollars to accommodate clients' withdrawal demands or prevent the outflow by finding a means to reassure them that their money is safe. That is never easy when there are so many clients rushing for the door. On Thursday, local media outlets reported that Bankman-Fried claimed that the firm needs $4 billion to stay solvent, with a funding gap of $8 billion.

There are also deeper issues to address. Just a day before the company decided to sell to Binance, Bankman-Fried tweeted that FTX was "fine" and that it did not deal with customer assets at all. However, a note to investors from Sequoia Capital, a venture capital firm that invested $150 million in FTX, stated that the company was facing not only a liquidity crisis but also solvency issues, implying that it owed more money than it actually had.

All this drama creates two questions in mind: Will FTX find a new helping hand to safeguard consumers' funds, or will it declare bankruptcy soon? Share your views in the comment section below.