What is Bitcoin Halving? Its Importance and effects

The available supply of fiat currencies fluctuates under the watchful eye of national central banks, whereas the total amount of Bitcoin is fixed and immutable. Even though Bitcoin is a digital currency, it cannot be generated indefinitely. Bitcoin maintains its inflation rate and scarcity with the help of two concepts.

First and foremost, there will only ever be 21 million bitcoins. Second, every four years, the quantity of new bitcoin added to the network will be cut in half. This second idea is known as halving. In this process, the Bitcoin system automatically decreases the number of new coins released with each new block. Let’s have a detailed look at it.

What is Bitcoin Halving?

A Bitcoin halving is simply an event in which the reward for mining Bitcoin transactions is lowered by half. This event also decreases Bitcoin's inflation rate by half and the rate at which new bitcoins enter circulation by half. It takes place every four years.

At the moment, little more than 19 million have been mined, leaving just under 2 million to be generated. The maximum is 21 million bitcoins, which will be reached in the year 2140. Miners will no longer be rewarded in Bitcoin for their work at that moment. Instead, incentives will most likely take the form of transaction fees, similar to what credit card issuers already charge.

Bitcoin’s transparent and automated supply is one of the reasons it is advocated as the world’s most popular cryptocurrency and equivalent to gold or fiat currency. The restricted supply of Bitcoin is a crucial aspect, as it determines its value and distribution.

Halvings are crucial for bitcoin economic models because they guarantee coins are produced at a consistent rate that decays at a predictable rate. One of the primary distinctions between cryptocurrencies and traditional fiat currencies, which have an endless supply, is the ability to restrict the pace of monetary inflation. 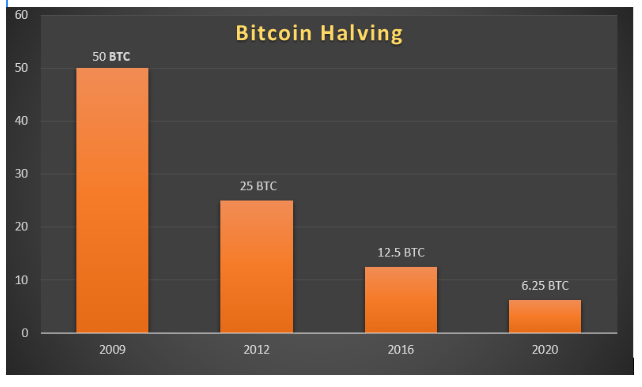 The most recent Bitcoin halving occurred on May 12, 2020. When the Bitcoin blockchain reached the block associated with the halving, the event occurred practically rapidly, and the block reward was reduced by half immediately.

A Bitcoin halving is typically followed by significant volatility in the cryptocurrency. The halving cycle reduces the amount of accessible bitcoin, increasing the value of bitcoins still to be mined. Change brings with it the potential to prosper.

For instance. the first halving occurred in November 2012, when the price of BTC was about $11; 3 months year later, bitcoin had grown to over $100. The second halving took place in July 2016, and Bitcoin's price dropped around $670 at that time before rising to an all-time high of almost $19,700 in December of that year.  Bitcoin was worth $8771 at the time of the most recent halving, in May 2020, and it skyrocketed in the months following.

How Investors and Miners are affected by Bitcoin Halving

If a halving does not raise demand and prices, miners will have little incentive to mine. The reward for completing transactions would be reduced, and the value of Bitcoin would be insufficient.

Due to lower supply and increasing demand, halving often leads to higher cryptocurrency prices, which is excellent news for investors. In anticipation of the halving, trading activity on the cryptocurrency's blockchain intensifies. However, as previously proven, the rate of price rise varies depending on the logistics and conditions of each price halving.

The impact of mining on the Bitcoin ecosystem is complex. On the one hand, a decreasing supply of bitcoin raises demand and prices. However, fewer payouts might make it difficult for individual miners or small mining operations to remain in the Bitcoin ecosystem since they may struggle to compete with huge mining companies. According to studies, Bitcoin's mining capacity moves in the opposite direction of its price.

As a result, as the price of the cryptocurrency rises, so does the number of miners in its ecosystem, and vice versa. A halving event is distinguished by a rise in price and can raise the likelihood of a 51% assault on Bitcoin's network since miners leave the network, making it less secure.

However, until there is no more Bitcoin produced, investors must keep a close eye on each halving occurrence. The reason for this is that the supply of Bitcoin, together with the demand for Bitcoin, is one of the most crucial elements influencing the price of the cryptocurrency.